Robert Plant: ‘first Led Zep rehearsal was beyond my imagination’ 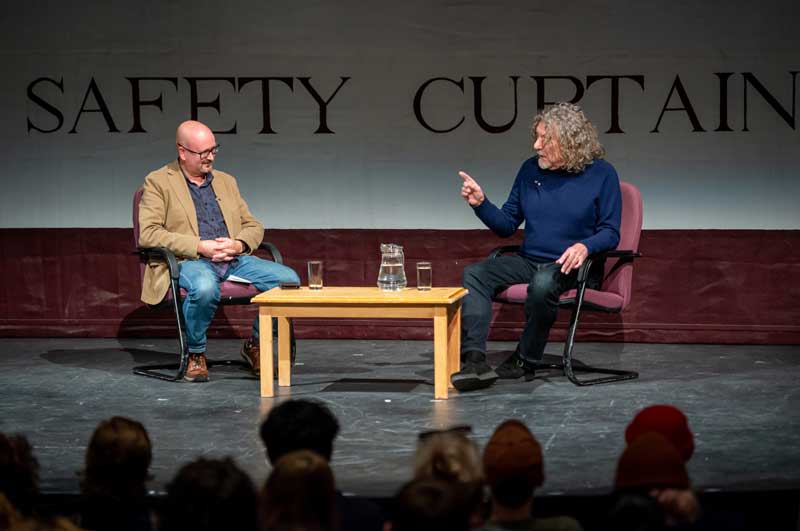 Iconic singer-songwriter Robert Plant told students at the Liverpool Institute for Performing Arts (LIPA) that the sound Led Zeppelin created when they first played together was beyond his imagination.

The multi–GRAMMY Award winner and Rock ‘n’ Roll Hall of Fame inductee was taking part in a Q&A with students. He was asked when he knew he’d arrived. Although he said there wasn’t one particular moment, he did say rehearsing with his former band for the first time was special. “John Bonham (Led Zeppelin drummer) and I had been in groups together way before Led Zeppelin and we knew we had something going on.

“Then we teamed up with Jimmy Page and John Paul Jones back in 1968. I was 19 years old then and the contributions and the combination of the four of us was something I could never have imagined. In a tiny room, the sound of what was going on and the interplay, it was a release – that was the moment, the big moment. I’d already released solo albums, but that day in that room in Chinatown in London, that was something different.”

Led Zeppelin were arguably the biggest rock band of the 70s. Their huge commercial success, based primarily on the sale of their albums – not singles, and legendary stadium shows changed the nature of the music industry. They disbanded in 1980 after the death of drummer John Bonham.

Since then, Robert Plant’s success has continued with a variety of projects and collaborations. In 1994 he reunited with Led Zeppelin guitarist Jimmy Page to record an album of new original material and re-worked Zeppelin tracks. No Quarter: Jimmy Page and Robert Plant Unledded was a collaboration with Moroccan and Egyptian musicians and was recorded live in Marrakesh and Wales.

In 2007 he embarked on perhaps his most successful and critically acclaimed project since Led Zeppelin, when he performed and recorded with bluegrass singer, Alison Krauss. Their first album together Raising Sand won five GRAMMY Awards in 2009 adding to the 2008 GRAMMY Award for their track Gone, Gone, Gone (Done Moved on).

During the one hour In Conversation... session Robert described how working with Alison made him a more disciplined singer. “When you sing alongside someone who’s already got their character in place it’s very interesting. I’ve got this renegade way of singing from the past and I had to learn how to temper it.

“The first time I sang with Alison Krauss she said to me ‘how do you expect to get through this? If I don’t know what you’re going to sing next, how can I harmonise with you?’ It was then that the light came on. If you're singing harmonic parts you have to stick to them.”

Robert Plant has just completed a UK tour with his band Saving Grace and singer Suzi Dian. He recently appeared as part of the 30th birthday celebrations for the BBC’s flagship music show, Later... with Jools Holland when he performed with Imelda May.