LIPA graduates share their top tips for success with students 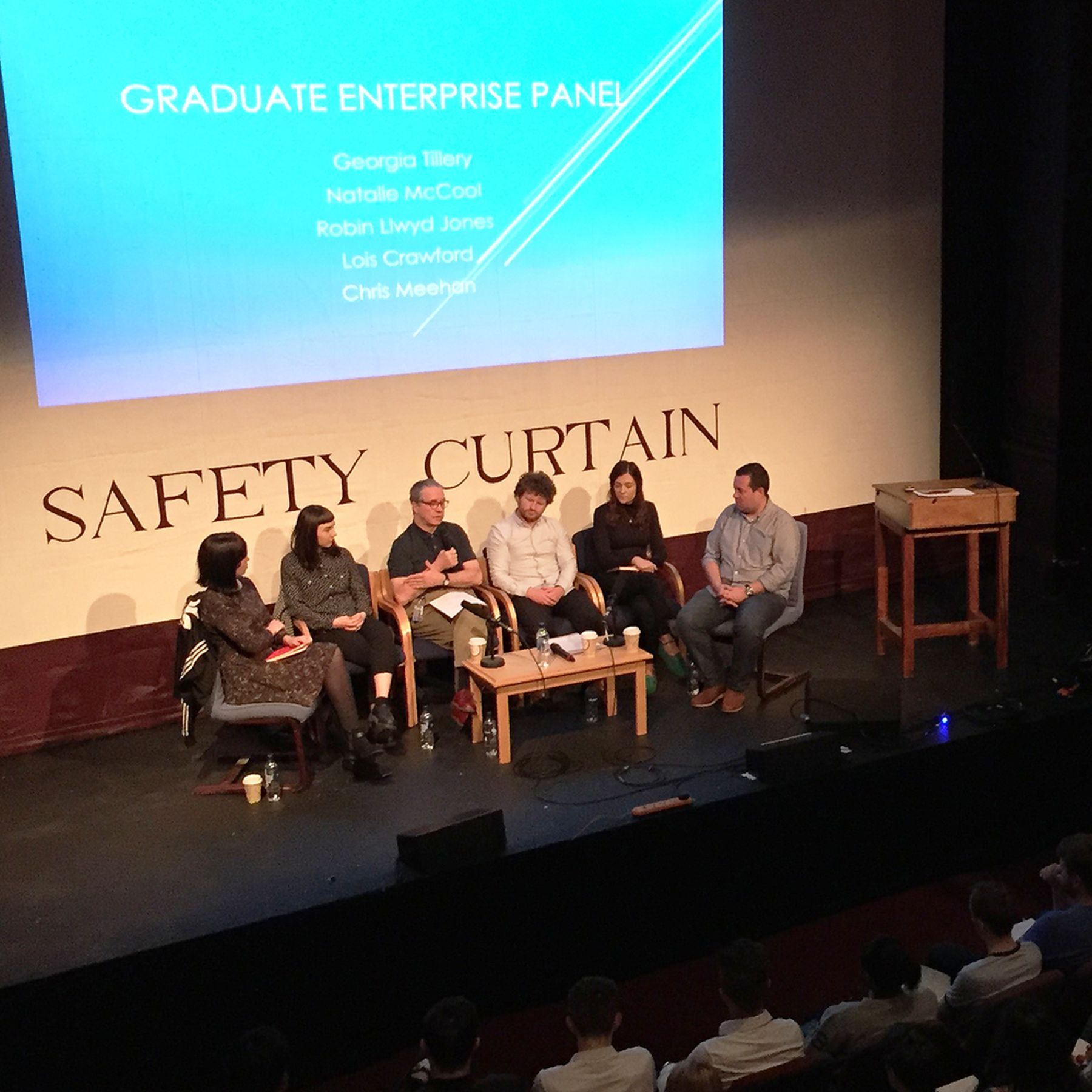 The panel was hosted by LIPA Principal and CEO Mark Featherstone-Witty, who began the session by telling the first year students: “This is part of your journey. We’re showing you some of the destinations you should be thinking of even at this point when you’ve just arrived here… All our graduates are a great resource. […] These five were sitting where you are sitting a few years back.”

Community Drama graduate Georgia spoke to students about the crucial enterprise skills that can help them create meaningful work opportunities for themselves within the performing arts industry. Returning to her hometown of Milton Keynes after leaving LIPA in 2013, Georgia founded her company Blacksheep Collective in a bid to diversify the city’s arts scene. She explained, “We decided to set up as a Community Interest Company… for us it was key to understand what we needed to do to register as that company structure. I also think that it’s key to understand your market, and also the product you’re trying to sell. We didn’t want to rely on grant funding… we wanted to create our own work that people wanted to actually buy, so we could become self-sufficient.”
Next, several other graduates encouraged students to take advantage of the many networking opportunities LIPA has to offer, in order to develop crucial contact-building skills as well as the necessary confidence to deploy them when initially starting out in the industry. Former music student Natalie McCool attributed her current success as a singer, songwriter and guitarist to the networking she began while still studying at LIPA. Natalie described meeting the producer who shaped her early career after winning a music competition as a student, saying to the first years: “You are in one of the best cities in the world for music and culture… Please go out and experience it. […] If you’re feeling nervous about an event, just go. Don’t let your self-consciousness catch you out.”

LIPA was a springboard to opportunity for Acting graduate Lois Crawford, who founded her Art in Education company Pick N Mix Theatre in 2014 having performed across the country with touring theatre companies after graduating. Lois described the value of the personal and professional relationships that students develop while attending LIPA, explaining, “The people in this room… will be your future employers and employees. […] Take advantage of the creative people that you’ll become well-acquainted with [at LIPA]. By making friends and contacts here it will be easier when you graduate.”
Robin Llwyd graduated from LIPA’s Sound Technology degree course in 2014, and now works as a freelance producer and sound engineer. The most recent graduate on the panel, Robin drew on his own experience to speak about the benefits of developing a strong, professional social media presence, especially when first starting out. He recommended that students build social media into their networking strategies: “[It shows] that you’re really keen… It shows that you are doing something and you’re always going to be in the back of somebody’s mind that way. Also get used to sending emails constantly… and gathering contact lists.”

Finally, Management graduate Chris Meehan discussed his ten-year journey from leaving LIPA in 2006 with a fledgling business idea to growing it into award-winning international music publisher Sentric Music. Recalling the feeling of starting out into the unknown, he encouraged students to embrace the excitement that comes with entrepreneurship and risk-taking. Chris said, “The beginning is the best time… [When] you’ve got no money, no plan, you can’t afford staff, you can’t afford a laptop, it’s the most exciting time, and it’s the time when… progressing in some way means a lot more.”

The annual Graduate Enterprise Panel is part of The Professional 1 module, which helps all students hone the critical business and life skills required to build successful, sustained careers in the creative and performing arts industries, whether they aim to perform or make performance possible.