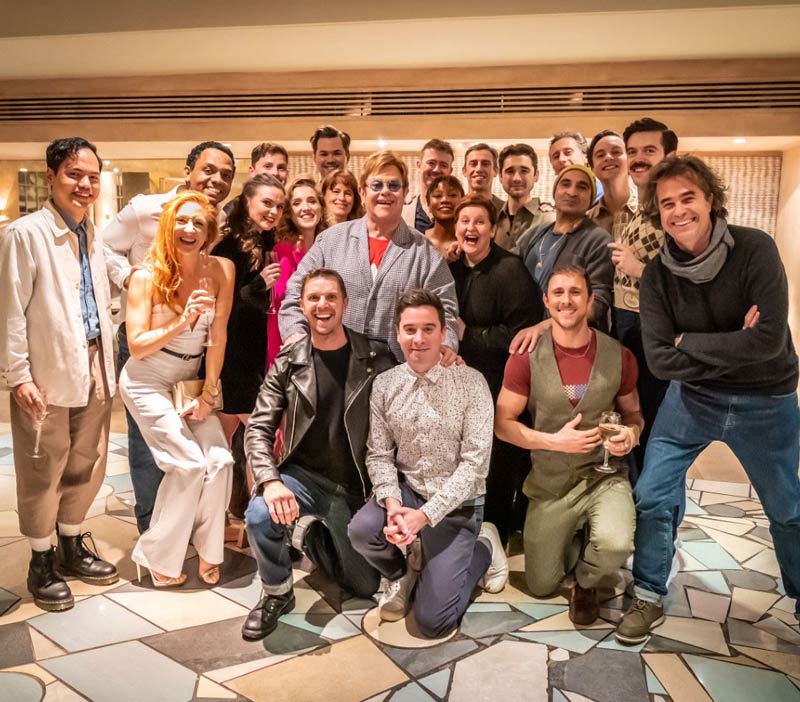 Bouncing back from the pandemic, working with his idols and a high-profile Christmas TV special meant Acting graduate Peter Caulfield (2002) had to call on all of his experience and skills in 2022. We caught up with Peter in December and asked him to reflect on the last 12 months.

“Coming out of the pandemic has been so difficult for so many performers and creatives. It’s affected every single element of our business and losing work has in turn knocked people’s confidence. For me it has meant developing an even grittier determination, focus and self-belief. Yes, you DO have the skills and ability to succeed and yes, you ARE a unique individual who has something to say and is able to change things.

“My passion lies in creating new work and this year I was lucky enough to work with some of my creative idols, Elton John, Jake Shears (Scissor Sisters) and prolific screen and playwright James Graham (whose credits include Sherwood, BBC). It was on their new Musical, Tammy Faye which we, the original cast, opened at the Almeida Theatre in the Autumn 2022.

“I was to open the show with a big number called Light of the World as the famous TV Evangelist Billy Graham. It was a real pinch me moment. Everything I had ever learnt as a performer over the years came together for this transcending moment and the standing ovations we received every night meant so much more having been through what we have all been through. It was theatre magic. It felt like the first time performing in a big show in the Paul McCartney Auditorium when I was training at LIPA. A moment to savour and never forget.

“I was also lucky enough to work on the TV drama I Hate Suzie Too. The Sky TV series was written by Lucy Prebble and co-created with series star Billie Piper, who is not only an astonishing actor but also an unbelievable dancer, writer and Exec producer! She is an inspiration and a force of nature. She plays Suzie Pickles a former child pop star turned actress and in this latest series she signs her life away by taking part in a no holds barred reality dance show called Dance Crazee (where I play her pushy choreographer Ollie).

“The series required quite a bit of improvisation on set and really trusting in your own ability to sit in a character and play around within their skin. It was an amazing TV project to work on, with MTV style dance video sections peppered throughout, making it entirely unique in its style. Again, it brought so many of the skills I learnt at LIPA together.”

Variety described Tammy Faye as ‘riotously entertaining’ praising Peter’s ‘gleaming, beaming Billy Graham’. While The Guardian gave I Hate Suzie Too a five-star review, describing it as ‘extraordinarily beautiful, exhilarating and sad’. Peter will be back on TV in 2023 with major projects lined up with the BBC and Disney Plus as well as more work on Tammy Fay.